Is it too late for me to 'grow into my feet?'

I've always had large feet - probably an American size 8 by the time I was 12. Does this seem odd for someone who is otherwise pretty petite? Yes. Despite my dad insisting they gave me a 'good foundation,' did I use to be embarrassed by these trotters? Yes. I am 5 foot 2 and have size 8.5/9 feet (UK 7). Flippers. Flat-footed flippers with no trace of an arch.

HOWEVER, as I've grown older, pretty much nothing embarrasses me (thanks kids) and I've come to love my feet. They've run a marathon, several halfs, and, with a little nail polish, they don't look half bad. Due to their sheer size, however, I cannot stop breaking my toes.

Yesterday afternoon was just the latest - I broke my pointer toe on my right foot tripping over the corner of the bed when I was tucking Freddie in. As I crumbled to the ground and tried not to swear, Freddie rushed over (he loves a good emergency) to see how I was. I got out the frozen peas, hobbled to the couch and iced my mangled toe on a few pillows.

Freddie pulled over the coffee table, put my water bottle on it, handed me a book about castles and put some rose petals he'd collected from the park in a train car on the table. He told me to call him if I needed anything, anything at all, and headed back down the hall to play with his truck.

You never know if they're grasping the concept of empathy but there it was. :)

Things Harry has thrown in the toilet...

6. Wads and wads of toilet paper.

Harry + the toilet = love. We've stocked up on toilet paper and hand soap so long may this love affair continue. 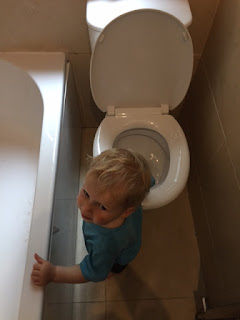 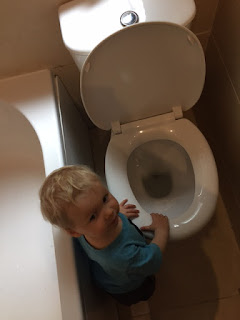 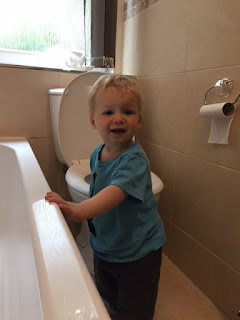 The day it rained puke

I've been puked on before. It's never fun but today was especially disgusting. The day started out OK; Elsie and Harry were feverish and very clingy but, as we've been saying for over a week now, at least no one is puking.

William took Freddie to preschool and the three of us snuggled/played a bit and then they took naps at 9:30am. I used nap time to take a nice shower, dry my hair and put on makeup (!). Nice to feel normal again after almost a week of being unwell myself.

Elsie woke up from her nap and was a bit happier, ate some plain yogurt, a couple blueberries and a small rice cake. Ten minutes later she was back to laying on the floor moaning. Harry woke up and joined her. They did that and competed for space on my lap for the next half hour. Cozy!

When it came time to go get Freddie, I asked Els if she wanted to ride on my back in the Ergo. She quickly said yes and immediately laid her head on my shoulders. I got her an apple juice box from the shop and she sipped it on the way. She didn't say much on the journey there or on the way home. Freddie told us about his day (two of the ten chicks hatched from their eggs and he planted a sunflower) and we saw a couple trains go by.

Once we got to our street, Elsie muttered something I didn't quite hear. 'What, honey?' 'Go home faster.'

That was my only warning before the puke shower began. It was like a volcano erupted out of her mouth. It poured over my shoulder and onto my foot (great idea to wear flip flops today!). I quickly got her down and then Freddie, Harry and I watched the spectacle of it all, unable to move. In seconds, the sidewalk was covered and it was only then I realized I should have held her over a drain or something. Oops.

Once it was over, we removed all our puked-on clothes that we could, considering we were in public (sorry neighbors!), and hightailed it home, a wad of disgusting clothes under one arm and a squishy foot squeaking the whole way.

A warm bath and nap seems to have helped. Fingers crossed that was all of it (but is it ever???).

Hope you weren't eating anything when you read this! And yes, we are back in Scotland. I need to change the header of this blog. If you enjoy reading about puke and how you're likely in a nicer, cleaner, comfier position than I am, check back here again soon. I plan on actually keeping up with it now that we're back.

P.S. Anthony, if you're reading this...the incident occurred just down from your door. Watch your feet on the way home tonight. William said he'd go down later with a bucket of water!
Posted by Unknown at 06:50 4 comments: